Closing in almost any retail application means mopping, cleaning, vacuuming, tying up the day’s business with a nice little bow and getting the place ready for tomorrow. In Alec Baldwin’s famous line from “Glengarry Glen Ross” he’s talking about sealing the sales deal, getting the contract signed, the handshake, finishing well. In this case I’m talking about both. 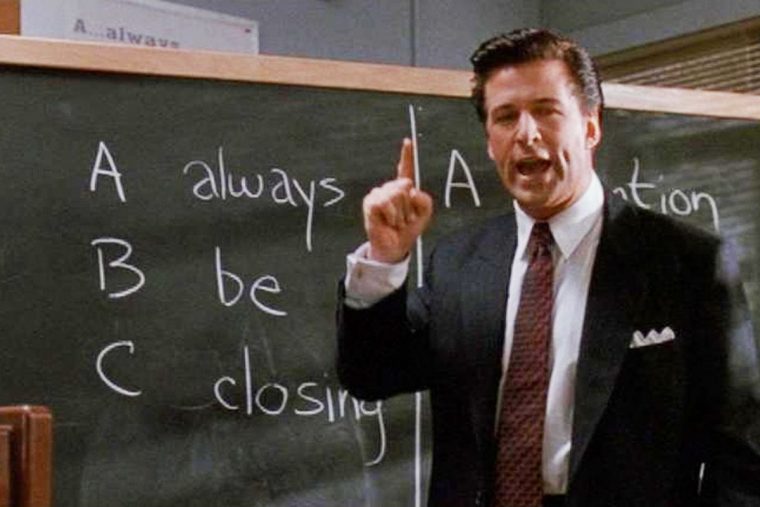 This blog is public because the principles herein are for everyone everywhere, however, I write with the audience of my team in mind. That means that sometimes I’ll get a little passive aggressive when it comes to sending them a message that might have some of them scratching their heads saying “is that for me?” In this case the 80/20 rule applies and 80% of this choir is being preached to, but to the other 20% (also not likely to read a note their boss a written on his blog) swallow this pill with a bit of food, it’ll be easier to stomach.

It seems to be that time of year when folks are moving on. Either moving to school, moving to the next -hopefully *better- job, or in some cases just plain ole being done. I can always discern who is going to move on to their next opportunity and kill it there by how they leave their current gig, and I’ll give you my top secret formula: Leave Well = Start Well, Close Poorly = Start Poorly.

Of course it costs my business money to have you work your last shift lackadaisically and leave the freezer wide open all night thus ruining all of the product stored in there and wreaking havoc on the freezer. Ill-intentioned or not, it happened while you were clocked in and closing up shop. But sadly it costs you a lot more to realize that in the technical sense you can perform terribly on your last shift and get away with it, but that’s a mindset that will plague you for the rest of your life.

My friend and e-mentor, Neil Kennedy, says it really well “You will never finance your million dollar dream with a minimum wage work ethic.” I hear it all the time, either the million dollar dream, or the debt of resentment from the lips of people who should really learn to close better.

“You will never finance your million dollar dream with a minimum wage work ethic.”

Joyce Meyer also states it pretty well “don’t want what someone else has unless you’re willing to do what they did to get it.” There’s not a ton of lottery winners that are millionaires. Most millionaires are closers. They do work they’re proud of and can stand behind.

If you want to know if you’re a closer here’s a simple test; Ask your new employer to call your former employer a week into your new job and pull this little fib “Hey so your name isn’t really working out here, would you hire them back?” And if they say “Absolutely” you’re a closer. Anything beyond an emphatic “yes” means you’re not yet a closer. And if that’s the case then “put that coffee down coffee is for closers.”

*Better in this case doesn’t mean working for me is “worse”. Moreso that better is taking the skills you acquired from this job, your job before this one, and your own self-improvement and finding something that aligns better with your new interests or ideas or skillsets.